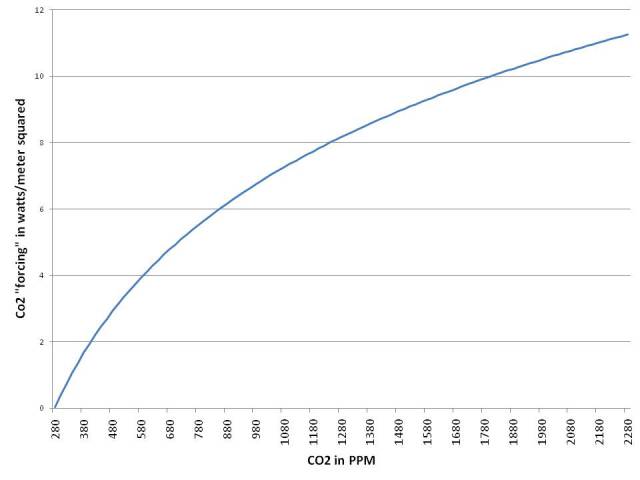 Global circulation models - AKA climate models claim to be legitimate because they say they can hindcast previous atmospheric temperatures. i.e. They claim their model projections reproduce past climate. For example: The global cooling period from the early 1940s to mid-1970s. This was done by adding a special factors (aerosols) for this period which they claim is no longer important today. Some people this is just fabricated data to give the GCMs a gloss of legitimacy. Just about all GCMs run too hot. They mis-forecast future temperatures too hot.

Have you looked at the model-hindcasting/fabricated-aerosol issue, as described below?

The climate models do not honestly hindcast the global cooling period from ~1940 to ~1975, because their authors fabricated false aerosol data to force hindcasting.

Therefore, the models cannot forecast anything, because they cannot hindcast. except through fraudulent inputs.

The climate models cited by the IPCC typically use values of climate sensitivity to atmospheric CO2 (ECS) values that are significantly greater than 1C, which must assume strong positive feedbacks for which there is NO evidence. If anything, feedbacks are negative and ECS is less than 1C. This is one key reason why the climate models cited by the IPCC greatly over-predict global warming.

Some history on this fabricated aerosol data follows:

The P-T (extinction) event was caused by global cooling, not warming as previously blamed.

Hot off the press - revolutionary climate finding - The worst extinction event in earth's history (according to wikipedia) was caused by global cooling - not by global warming (as previously thought). So much for "the science is settled"

... Scientists from the UNIGE explain the global temperature drop by a stratospheric injection of large amounts of sulphur dioxide reducing the intensity of solar radiation reaching the surface of the earth. “We therefore have proof that the species disappeared during an ice age caused by the activity of the first volcanism in the Siberian Traps,” added Urs Schaltegger. This ice age was followed by the formation of limestone deposits through bacteria, marking the return of life on Earth at more moderate temperatures. The period of intense climate warming, related to the emplacement of large amounts of basalt of the Siberian Traps and which we previously thought was responsible for the extinction of marine species, in fact happened 500,000 years after the Permian-Triassic boundary ...

Alarmists think CO2 caused the P-T event, 252 million years ago, by causing run-away global warming. They got everything precisely back to front. They are exactly wrong. This P-T event is one of the reasons they get so uptight and rude when you don't believe their propaganda. Many of them think they are saving the world from an analogous P-T extinction by stopping "carbon pollution". Idiots!!!

“Most of the evil in this world is done by people with good intentions.”

This is a rare example in the climate debate where the evidence is clear cut: one side lies and the other tells the truth, and it's obvious. Counting polar bears is quite simple (compared to most other climate science).

That's why I picked this example. It's impossible to disagree on the science without lying.