The goto paper for academic courses on the greenhouse effect which forms the basis of man made global warming alarmism. Taught in physics undergraduate courses across the world and responsible for the dumbing down of science for the last two decades.

I asked the following question to Astrophysicist Joseph Postma

"You’ve mentioned a few times that you were taught the Greenhouse Effect flat earth physics diagram in your undergraduate degree. May I ask why do you think you didn’t pick up on the pseudoscience back then? What conditions prevailed back then that obscured the errors from you?"

"Now that’s an excellent question! Great of you to find the dichotomy there and realize that it is a question. If we can solve that question, perhaps we could solve it for others?

"Let’s see. Well, when I was in undergrad, it was simple: I trusted what I was being told. I saw the flat Earth, saw how it was mathematically formulated, and thought that since it was an average, then everything is OK. I simply didn’t question it or think about it. That’s what happens in a class-room: you accept what you are told. You believe it because nothing being taught in class would be wrong anymore, would it? How could they teach wrong things in a classroom, when in a classroom the point is to get the correct answers?

"Wow…that is scary. Doesn’t that show just how corruptible, corrupt, dangerous and useless our education system actually is. It’s all brain washing and conditioning at a subconscious level. How can anything taught in a class room be wrong when the point of being in a class room is to learn true things that you get rewarded for repeating with check marks and higher grades?

"So to answer your question, I think the answer is that the conditions which prevailed were: naivety. And that is a term I’ve used in recent articles criticizing how academics so readily accept bad science from “high” sources – they naively believe that other people are doing right things.

"Why would that work for me? I don’t know.

"But the key is that a person has to begin to realize that the world is not true as it has been presented to them. You have to realize just how much we take everything for granted, without truly understanding where these ideas came from. It takes a lot of work and a lot of critical thinking…and this is something that I guess most people aren’t interested in doing, or maybe they would be, but they’re too propagandized and distracted with trivia."

Statisticians are misled by bad data. 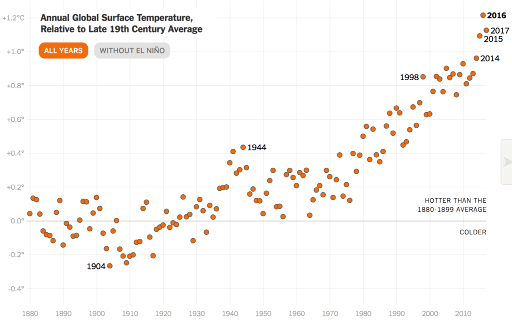 I suggest the chart Andrew leads that post with is junk data. Too dirty, adjusted and infilled to form a record of reality.

We Should Not Call Climate Alarmists "Liars".

Because they are far more dangerous and deluded than mere liars.

Calling alarmists liars is OTT, and counterproductive. It undermines criticism. OK, I admit: some of them have lied. But that's not the norm, nor was it responsible for their 15 years of fame. Their norm is a groupthink so biased, so committed to its mission, that it's almost insane. Groupthink and mission. But groupthink leads to incompetence. Mann was favoured and parachuted into position as IPCC lead author. His Hockey Stick was accepted as “science”. Even today, climate alarmists tell me it's “science”. No group-thinking climate alarmists looked at what Mann did. Not one looked at the nitty-bitty details. Only skeptics did that to find the flaws, and pseudo-science. Yet that same groupthink still believe it acceptable to drive skeptics out-of-work! (So some of them tell me), even when they can see the harm they’ve done, they still want to cause more. The “climate consensus” are dangerous, irresponsible people. But, in their minds, they do not tell “lies”. They do irresponsible “science” (modelling actually). Declare it to be “true”, settled and a consensus. All because it most accurately represents their bias, and fulfills their "mission", or purpose.

The Wegman report was made in 2006. It is an independent analysis of the statistics used to create the Hockey Stick, which starred in the IPCC 3rd report. It is here.

“The controversy of Mann’s methods lies in that the proxies are centered on the mean of the period 1902-1995, rather than on the whole time period. This mean is, thus, actually decentered low, which will cause it to exhibit a larger variance, giving it preference for being selected as the first principal component. The net effect of this decentering using the proxy data in MBH98 and MBH99 is to produce a “hockey stick” shape. Centering the mean is a critical factor in using the principal component methodology properly. It is not clear that Mann and associates realized the error in their methodology at the time of publication.” Finding number 7 discredits claims that the 1990s were the hottest decade in a millennium: “Our committee believes that the assessments that the decade of the 1990s was the hottest decade in a millennium and that 1998 was the hottest year in a millennium cannot be supported by the MBH98/99 analysis. As mentioned earlier in our background section, tree ring proxies are typically calibrated to remove low frequency variations. The cycle of Medieval Warm Period and Little Ice Age that was widely recognized in 1990 has disappeared from the MBH98/99 analyses, thus making possible the hottest decade/hottest year claim. However, the methodology of MBH98/99 suppresses this low frequency information. The paucity of data in the more remote past makes the hottest-in-a-millennium claims essentially unverifiable.” McIntyre and McKitrick exposed the problems and showed that stationary trendless red noise would exhibit the same hockey stick shape after being processed using the MBH methodology! This was confirmed by Wegman.

The urban heat island effect refers to the tendency of urban temperatures to be much higher than rural temperatures. The extra warmth is due to:

Is the global warming scare due to misread thermometers?

One might think that scientists are able to compare the effect of errors introduced by relying on either 1) satellites, or 2) existing ground stations. I never see them quote these errors to give any measure of reliability, or any measure to compare the quality of satellite against ground station measurements. They seem to have no agreed method to calculate the degree of error. So their choice of one over the other (their preference for massively adjusted ground station data) is a subjective judgement.

Today's climate scientists are not behaving as real scientists.