Clinton lost, Trump did not win as such. She had far fewer votes than Obama in 2008 and 2012. Trump's vote was about the same as Republican presidential candidates in those years. 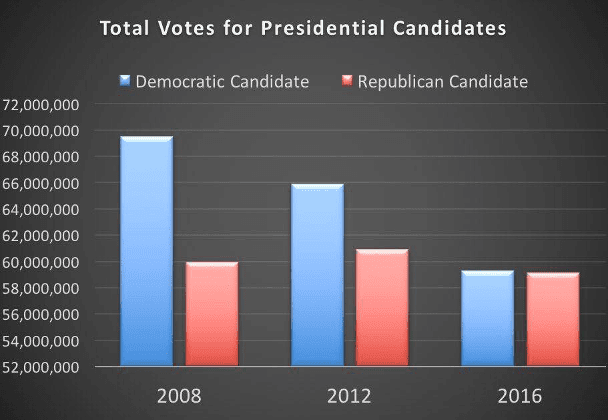 Technically Clinton lost, but it was the Dems who really lost. By selecting her as The Anointed One. More realistically she was given Buggins' turn. Republicans even gave Dems the opponent they craved: Trump. Dems were tooled up with a more efficient (better educated, scheming) Party machine. Just as much money. Still lost!

"vote for us because they are racists"

At the the end of the day, that kind of thing is all identity politics comes down to.

Identity politics are nothing new. The USA was founded on it. Whites played off against blacks. Each wave of immigrants played off against newcomers. Catholics, Jews, Irish marginalized in turn. Yet there was always some hope on offer: The American Dream. That's gone for sure. Multiculturalism is supposed to lead to different identities living in harmony. That's not how multiculturalism plays out in actual politics. In practice it's the same old identity politics reversed. This time the people to fear are whites: white men, white women, white privilege, or white racists - as the Dems propaganda machine would have it. Because if we're to coalesce the multiple cultures around something, what can it be? The American Dream is yesterday's dream. Hope for a better future is gone. Tomorrows nightmares are all that's left.

With no positive policies : just same old, same old. They make a new anti-white identity politics. This tries to unify the multiple 'marginalised' identities (blacks, latinos, gays, women) against white men. It works the same way the same old identity politics 'worked'. Yet knowing they can't sell identity + green because there is nothing positive there to give people. They end up selling hate. Hate is hard to sell when your message says Love Trumps Hate. Incoherent. I'm glad lots of people rejected the Dems nowhere campaign. It leaves me with a sense of hope for the American people. A sense they are wiser than their wannabee Machiavellian politicos.

Green Policies are intrinsically negative too

The other big influence on Dems : the greens. Green policies are directly opposed to the old economic growth policies of FDR's New Deal Dems. Today's Dems have no economic alternative because growth is off the table. No American Dream. Not even a mildly pleasant slumber. Just green nightmares: 'carbon' pollution, the weather misrepresented as climate change, humanity as the villain murdering Gaia. There are good reasons why environmentalism has such a low priority on voters' minds: everything about it is associated with bad things or limits.

Malthus: the ghost is the Dem machine.

Left greens suppose they exorcised Malthus from their policies/politics by never talking about him.

Look: we are all for immigration today : we are left greens!

Anyone who dares mention him will be torn down by a torrent of PC emotional blackmail. The elephant in the room: is all green policies implicitly invoke Malthus, even as they try to explicitly hide him. Green Luddism, anti-GMO, antinuclear power, the focus on limits, sustainability, renewables, organic farming, climate, whatever. All limits obsessed. It follows: if there are limits there are already too many people. Not saying so does not make it otherwise. The hate that dare not speak its name will be heard. It is all shot through with Malthus. Not enough to go around.

“Please sir, may I have some more”

No. You cheeky blighter. You already have too much. Americans with a lower standard of living than their parents, decaying infrastructure, harassed by a media doom machine, are told to open the borders! Au Contraire, they say: if there isn't enough in America for those already living here, how can there be enough for new immigrants?

Even a mid-ling, at best, realtor beat the wannabee Machiavellians running the Dem machine. All he had to do was offer a glimmer of hope: Make America Great Again

By embracing green ideas, the Left commit political suicide. The Dems can't see what they did. They are blind to their self-immolation.

To finish it off: there is no such practical project as left-wing environmentalism. No such thing as green socialism. Fortunately, the typical voter can smell rotten politics and will never vote for it. This is why greens are always trying to smuggle their policies in through the back door. In through some unaccountable body such as the EPA, UN, a global treaty. Demands for democratic accountability are a good way to counter the threat of environmentalism.