Fear of what - radiation or plentiful energy?

all that is real is rational


Why do greens still oppose nuclear power? OK, not all greens do, but nearly all green organizations do. Could there be a "sensible" (rational) reason for this?

The opposition to generation, and pushing for efficiency, stems from an acetic streak in the environmentalist movement. (i.e. "too much" consumption is a sin) So the fact that renewables can't generate power as well, and are not dependable, is actually a plus to that mindset.

In France, 407 TWh (75%) out of the country's total production of 541 TWh of electricity was from fission-electric power stations. In 2012, it exported 45 TWh of electricity to other European countries. It's electricity price to household customers is the 7th-cheapest amongst the 28 members of the European Union, and also the 7th-cheapest to industrial consumers, with a rate of €0.14 per kWh to households and €0.07 per kWh to industrial consumers (2012). With a similar sized population, France uses a lot more electricity than UK. UK peak demand is about 55 GW. In February 2012, freezing temperatures across the vast majority of France saw the record peak of electricity consumption smashed, hitting 100.5 GW. A more normal French peak, in the absence of cold spells, was 82.5 GW on 9 December 2014.

The lessons I draw from this are:

The fact electricity consumption is so high in France might explain why so many greens are so dead against it. Apart from decarbonizing energy, the other flagship climate policy is energy efficiency - which basically means using less energy. France uses a lot of electricity. That's a "rational" reason so many greens could still be opposing nuclear power. It's their neo-Malthusian economics wot dun it - not their irrational phobia of radiation! 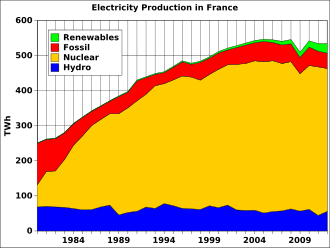 Why not just admit it?

One aspect of less consumption, degrowth, and doing with less, is that it's unpopular with people. Greens can't come out and say. "We want less - for everyone". It's a sure vote loser. So the public must be scared into voting for policies that give us less. Last years British election was a classic example of this. The English and Welsh Green Party actually want degrowth. The can't say that. So their 2015 manifesto actually promised growth for local economies, but admitted degrowth for the national economy. An incoherent: have your cake and eat it argument. So many green arguments are equally incoherent e.g. supporting intermittent renewables such as wind and solar despite the harm to the environment done, supporting organic farming which allows more harmful, less discriminatory pesticides, and needs more land per unit of food made. In every economic aspect, green ideas promote lower productivity, which is actually more wasteful (and less sustainable). They argue for sustainability but their policies don't actually lead there. Good evidence they don't actually want what they argue for.

But surely green fears are based on a flawed understanding of risk?

A theory goes that we form our political opinions (including pro- or anti- nuclear power, global warming, etc. according to our tribe. See David Ropeik, and cultural cognition. The problem with this notion is it overlooks the origins of environmental fears. If we examine fracking, in particular, we can see how greens manufactured an opposition against fracking by systematically lying against it. Even more damning evidence against cultural cognition is Solitaire Townsend's carbon fairly parable. If the carbon fairly could cast her spell to take away the negative effects of CO2 (global warming), then 99% of greens would vote against her. I conclude, it was the neo-Malthusian mindset wot dun it, not the fear of CAGW.