It was the Sun wot dun it. Probably most important science you'll read in your lifetime ....

For those who cannot read the paper from the first time, let us repeat again what has been done. By applying the Principal Component Analysis to the solar background magnetic field, we discovered, at least, four pairs of eigen values (or 4 pairs of independent components of magnetic field) in the solar full disk magnetograms for 21-23 cycles with the first pair being the principal components (Zharkova et al, 2012). These two principal components are shown to be caused by a dipole dynamo sources while the other 3 pairs of independent components are shown to be caused by quadruple sources (Popova et al., 2013) as simulated for latitudinal variations of magnetic field dynamo waves.

Hence, in Fig. 3 we presented the summary curve of the two principal components of the solar magnetic field waves caused by the dipole magnetic sources only, to fit the classic dynamo theory by Parker (1955, 1993). And this curve reproduced correctly the activity in the past 800 years: the main solar minima (Dalton and Maunder), produced further minima in the medieval period (which by the way comprises 5-15 century), reproduced the minimum by Wolf (if the curve is extended by another 400 years) and the modern maximum. If the horizontal lines showing schematically where these minima are located are slightly shifted, this does not matter, because the summary curve is there and shows the exact locations of these minima. To build such the complex plot (Fig. 3) in the modern plotting software, one need to trade the visibility of words with their location. And given the fact, that this curve is only produced by the dipole dynamo waves, this fit looks rather remarkable. The first attempt is the most difficult one as Parker (1955) has shown us.

So far we did not have a chance yet to process temporal variations of quadruple components which are shown to have amplitudes comparable but slightly lower than the dipole ones. These other eigen values are shown to affect the magnetic filed wave variations in each hemisphere (Popova et al, 2013). They will definitely modify the summary curve, and this work can be done in the nearest future. However, we do not believe that these modifications will be as dramatics as the authors of the comment show to produce the Sporer minimum derived from the terrestrial data. We believe, this minimum needs to be look at more carefully before one can decide if this minimum can be reproduced by quadruple components of the solar magnetic field, or it is simply the terrestrial feature.

But after we built the curve for 5000 years which I will show in the few upcoming meetings and we publish in another paper, we can confidently say, that this method allowed us to derive a very robust law for the solar activity which fits nicely not only Wold minimum moaned by Dr. Usoskin but also the Roman warm period and many others features. And we are very glad this happened, because we have the tool now to make a spectral analysis for these magnetic waves, similar to a prism affecting the white light and to explore separately each mechanism of the dynamo wave generation, one after another, and not all simultaneously, as many authors do so far.

Does anyone seriously believe that the Sun would have such the stochastic heartbeat as a schizophrenic's brain scan shown by Dr. Usoskin in his comment below, and not a more regular heartbeat with a grand cycle of 300-370 years reported by Clough, 1894, Kinsmill, 1906, by us (Zharkova et al., 2015 above) and by many other authors (N. Scafetta et al, 2015, for example)? These references cited in our paper or in the ADS.

The authors Usoskin and Koval'tsov use only 400 years of the solar data for sunspots available after 17 century and then merge (without any validation) them with the data found from the terrestrial proxies for definition of the solar activity before 17 century. This merge is something one would call 'comparing the apples with oranges'... Because the terrestrial data are strongly affected by many terrestrial events occurred beyond any registration in the past, like local fires, volcanos, asteroids, comets etc., which can block the solar light and disguise the solar activity as result. Of course, in the early medieval years the humankind could not affect the variations of solar irradiance but natural disasters can be a very key issue, which is definitely not considered by the keen authors of the comment.

As soon as we present our curves for 5000 years to the meetings and compete the paper describing the progress, we will make them all available on this website as well. Shall I say 'Watch this space'...

on behalf of the co-authors

This person Ben speaking nonsense, I am sorry to hear it. I wonder if he can read in plain English, because he twists everything said in our paper. The science is not a religion, it reports real facts despite anybody’s believes.

This person Ben did not understand that the oscillations of the baseline magnetic field are much smaller than the magnetic field variations during normal solar cycles or during grand solar cycles. These oscillations are related to the view of the Sun from the Earth, and not related to the processes on the Sun which produce solar activity of 11 or 22 years and grand cycles reported by us in the paper Zharkova et al, 2015.

Our current paper exposes that the Earth came though 60 super-grand cycles of 2000 years . The Earth (and other planets) will be warming by up to 3C and cooling every 2000 years. And despite this warming in the past the Earth is still here as usual rotating around the sun and around its axis, so there are natural mechanisms allowing it to survive these processes without any human interaction. Romans grew grapes in Scotland and England during the Roman Empire times and we might come back to these times.

This steady warming caused by the orbital motion of the Sun and Earth is still to be interrupted twice by the grand solar minima when the solar input will be reduced. These grans solar minima (GSM) are to be generated by double solar dynamo waves inside the sun as it was predicted earlier. The GSMs will occur in 2020-2055 and in 2370-2415 and the solar irradiance will decrease during these periods because not much activity will happen on the Sun. Nowhere here in our estimations is CO2 participated as we did not investigate the terrestrial atmosphere besides using the research by Akasofu, 2010. And if you look at his paper, Fig. 9 he exposed the fault in statistical extrapolation of terrestrial temperature by IPCC.

Hence, in our paper we provide the proof that our planet can survive much bigger temperature increases than IPCC people scaremongering the humankind. Furthermore, it raises the attention to the fact that we observe solar activity from a celestial body and thus cannot avoid the effects of orbital motion, like Milankovitch cycles. The solar inertial motion is the additional effect to Milankovitch cycles. I hope, that our paper would advise all these pupils who were brainwashed by the alleged human-made global warming to return to schools and to continue to study better Maths and Astronomy.

This paper also explains that the grand solar minima in the solar activity will be real blessings for the people on Earth allowing them to catch up their breath and to sort out their businesses to embrace the natural chain of events with increasing temperature. Although, they would need to make some arrangements for providing food and heating in these period. But we need to embrace the natural events and adjust our lives to them. May I suggest to read our paper carefully before jumping to any wrong conclusions.

There is too little CO2 in our atmosphere not too much. Atmospheric CO2 has been falling since life on earth began. Life sequesters it away as limestone and fossil fuel. It fell to only 180ppm in the last major glaciation (ice age), when colder oceans sucked so much of it out of the atmosphere. When it falls to 150ppm life on earth is over. Because plants die with CO2 at that meagre level and all animals feed on plants or other animals.

Nor should anyone assume the CO2 currently in our atmosphere will stay there. The atmospheric residence time of CO2 is about 7 years. Not 100 years as the IPCC lie it is.

Humans are not killing the planet. We have been saving the planet for life by putting CO2 into our atmosphere. 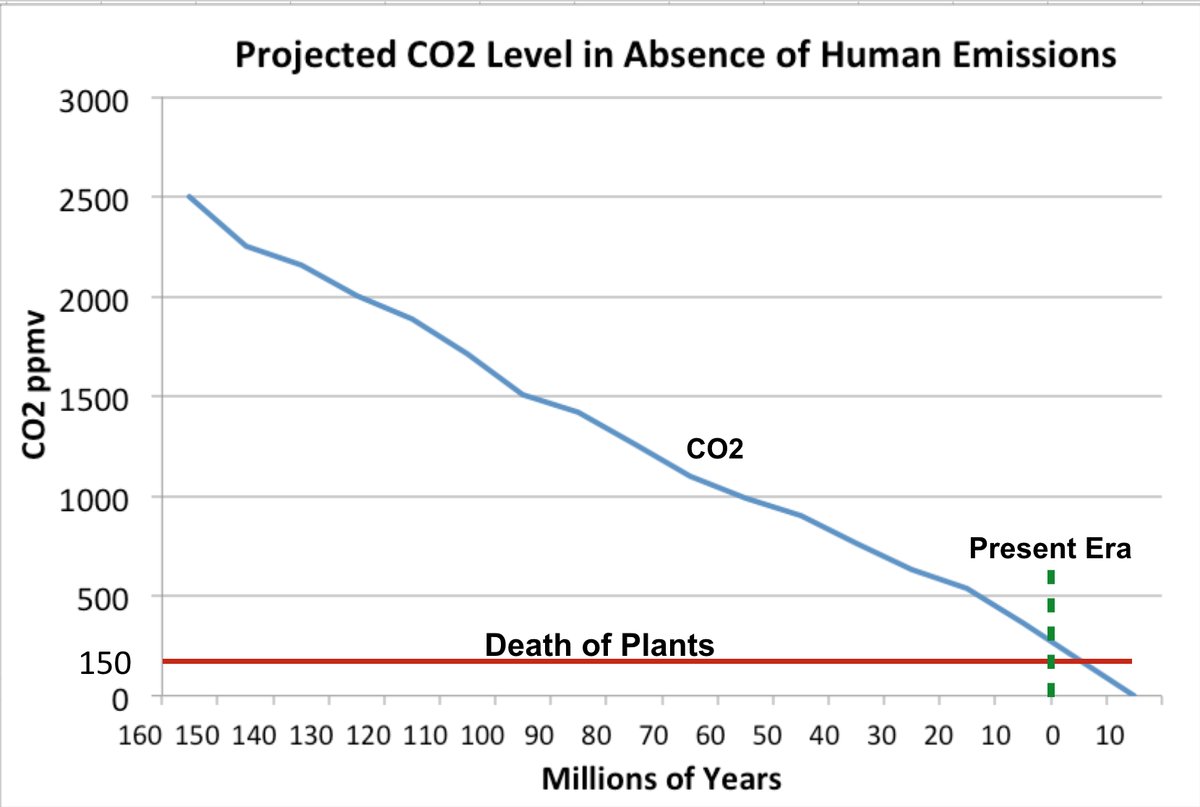 I know disrupting the climate consensus on the basis of it's framing issues is a way to go for actual scientists who must keep their jobs, but I still prefer to attack it on its core ideas. Namely (1) the greenhouse gas effect itself, (2) the 100% man-made claim, (3) that solar-driven climate change is climate denial. I think we should stop telling people its anything to do with religion. It's politics: scientists doing what politicians tell them to. If any disbelieve that, please read Bernie Lewin’s book, suggested by Judith. Alarmist/consensus politics are driven by means-ends rationality. Although science seems to be driven by a similar rationality, it isn't quite. Science has principles which almost transcend any specific science. I'm thinking Feynman here. These principles are diametrically opposed to climate alarmism.

A German professor has confirmed what skeptics from Britain to the US have long suspected: that NASA’s Goddard Institute of Space Studies has largely invented “global warming” by tampering with the raw temperature data records.

Professor Dr. Friedrich Karl Ewert is a retired geologist and data computation expert. He has painstakingly examined and tabulated all NASA GISS’s temperature data series, taken from 1153 stations and going back to 1881. His conclusion: that if you look at the raw data, as opposed to NASA’s revisions, you’ll find that since 1940 the planet has been cooling, not warming.

According to Günter Ederer, the German journalist who has reported on Ewert’s findings:

From the publicly available data, Ewert made an unbelievable discovery: Between the years 2010 and 2012 the data measured since 1881 were altered so that they showed a significant warming, especially after 1950. […] A comparison of the data from 2010 with the data of 2012 shows that NASA-GISS had altered its own datasets so that especially after WWII a clear warming appears – although it never existed.

Apart from Australia, the planet has in fact been on a cooling trend:

But the activist scientists at NASA GISS – initially led by James Hansen (pictured above), later by Gavin Schmidt – wanted the records they are in charge of maintaining to show warming not cooling, so they began systematically adjusting the data for various spurious reasons using ten different methods.

The most commonly used ones were:

Ewert’s findings echo that of US meteorologists Joseph D’Aleo and Anthony Watts who examined 6,000 NASA weather stations and found a host of irregularities both with the way they were sited and how the raw data had been adjusted to reflect such influences as the Urban Heat Island effect.

Britain’s Paul Homewood is also on NASA GISS’s case. Here he shows the shocking extent of the adjustments they have made to a temperature record in Brazil which has been altered so that a cooling trend becomes a warming trend.

Tony Heller made these gifs to illustrate NASA GISS edits to the global temperature record: