Who are the real ‘flat earthers’ here?

One of my better comments in reply to:

(1) “data homogenization for [temperature] stations moved from downtowns to suburbs can lead to a significant overestimate of rising trends of surface air temperature.” – https://link.springer.com/article/10.1007/s00704-013-0894-0

(2) “the global temperature increase during the last century is between 0.4ºC and 0.7ºC, where these two values are the estimates derived from raw and adjusted data respectively” – http://www.itia.ntua.gr/en/getfile/1212/2/documents/EGU2012-956-1.pdf

Homogenization can nearly double actual global warming. Anyone who believes their bias or imagination before the facts must be termed a ‘flat earther’ too. I hear you ask me: Q: ‘how are these climate scientists biased?’. A: we are all biased, but some of us have critics to moderate our worse excesses. In contrast, where they can, climate scientists drive their critics out of work. e.g. Roger J. Pielke, Peter Ridd, …

You may say that a few mistakes here and there are justified. But these 'mistakes' are systematic; almost the norm now. Any scientist who does statistics without checking for their own bias is either incompetent or does not care about bias because they believe they have an 'important narrative to tell us'. With climate scientists, I think it is probably both. I don't really think they are flat-earthers; just dangerous and out-of-control.

PS 2: The authors of the article I wrote about are both scientists. They are projecting demons of their imagination onto their critics. Something we all do when we demonize our opponents.

pH is a measure of acidity (or basicity). When pH is below 7 solutions (like the oceans) are said to be acidic. With pH above 7 they are basic. Ocean pH is about 8, basic. It actually varies quite a lot depending on which ocean you measure, at what depth.

"In the past 200 years alone, ocean water has become 30 percent more acidic"

due to CO2 from burning fossil fuel.

"Over the past 300 million years, ocean pH has been slightly basic, averaging about 8.2. Today, it is around 8.1, a drop of 0.1 pH units, representing a 25-percent increase in acidity over the past two centuries."

1) There is 38,000 Gt on carbon dissolved in oceans (27ppm). Mostly as the bicarbonate ion HCO3- Total carbon available in fossil fuel reserves = 5,000 Gt. If all that fossil fuel burnt, and the CO2 produced then dissolved in the oceans it will raise the ocean carbon content to 31ppm. To put things into perspective: in contrast to the 27ppm of carbon, oceans have 35,000ppm of salt in them.

Total carbon emissions (as CO2) since before industrial times ~ 500 Gt. Not all that can end up in oceans. Some stays in atmosphere, some is sequestered on land (in plants and trees), more is sequestered by oceans.

2) When carbon dioxide dissolves in water. It first becomes CO2(aq). Then:

But when this happens only 0.3% of the CO2 dissolving in the oceans becomes "carbonic acid". The rest mostly stays as CO2(aq).

The actual (active) acid here is H3O+(aq), sometimes written as H+(aq), and referred to as "hydrogen ions", or hydrated hydrogen ions. This is what pH measures. pH is literally "the negative log of the hydrogen ion concentration".

Such a low dissociation constant implies about 0.5% of the carbonic acid (H2CO3) will act as acid (as hydrogen ions). [calculated as the square root of Ka a by a "very back of envelope" method!].

Note: In comparison a strong acid like hydrochloric acid is almost 100% dissociated to make actual "acid", or hydrogen ions, which may be written H+(aq) or H3O+(aq).

4) Carbon dioxide dissolving in oceans acts as a buffer, not an acid. As the name implies, a buffer prevents, or greatly reduces, pH changes.

5) What kind of pH change might we really expect?

6) Evidence suggests fraud in the "science" as well.

The pH data has been tampered in the CO2-AGW consensus paper on declaring ocean water acid by 0.1 decrease. The reanalysis of public pH data from the same source in Univ of Hawaii shows the data tampering in the peer-reviewed consensus paper. 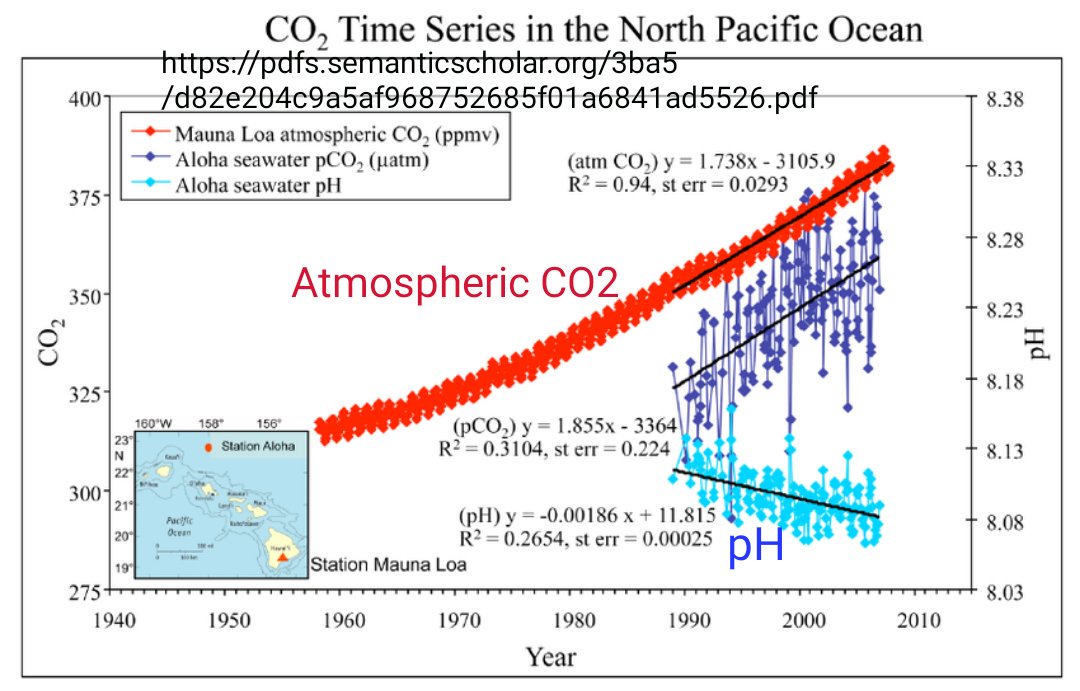 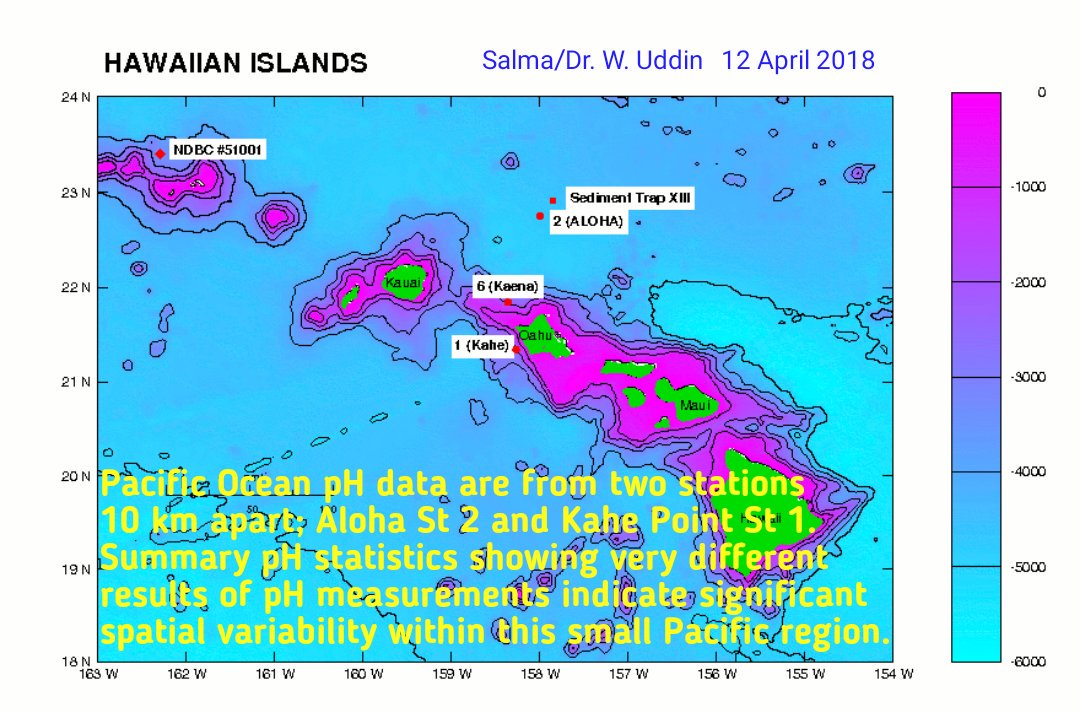 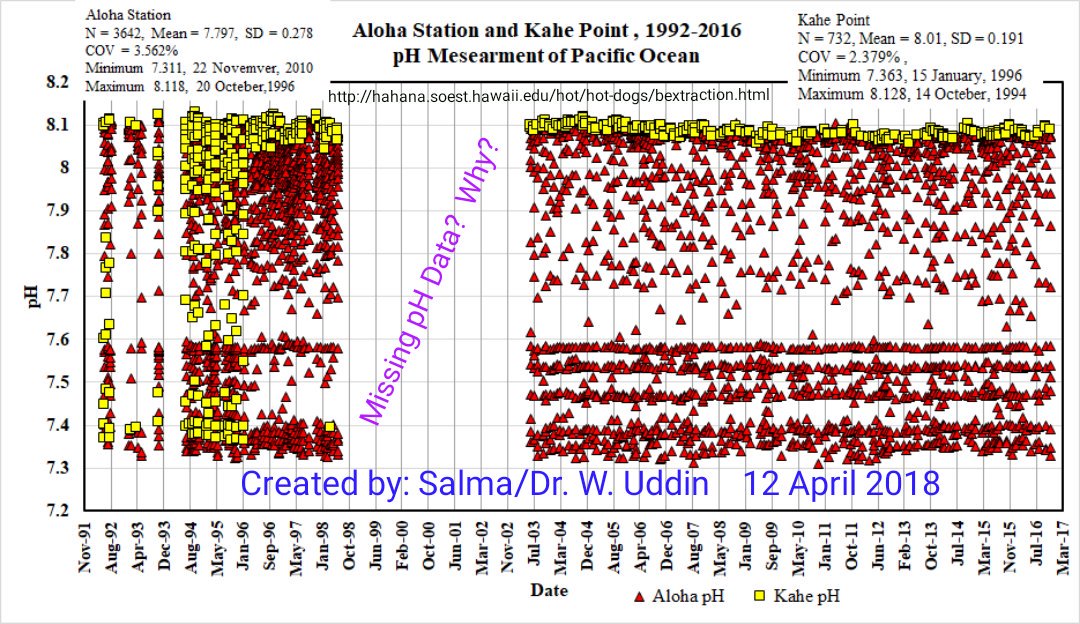 7) A reply from a critic

There is at least one attempt to refute me here: Bad Science or "Climate Alarmism". You tell me

This is the best reply I've had so far.

Re: How can climate scientists claim 30% acidification of the ocean due to CO2?

As you say in your blog:
Quote

I will skip the first step, and focus on the second:

The above approach is fundamentally flawed (I have stricken the primary mistake through). As you point out, the system is buffered, by the equilibrium of H+ CO2, H2CO3, HCO3–, and CO32–. This complex buffering means that the linear relationship assumed in the above calculation is not valid. Instead, we need to consider the relationship between all of the species. You have also not considered how much of each of the carbon-related species are already in solution, and what their relationships are to each other and to pH.

I recommend studying up on this more before posting:

It is also worth emphasizing (and you have noted it, but I think you should consider the ramifications more carefully), that the system is NOT IN EQUILIBRIUM. The pH is not the same everywhere because the ocean is not mixed perfectly well. This means that at the very surface, where the ocean is in contact with the acidifying CO2, the buffer can be temporarily over-burdened, before more bicarbonate comes up from the depths to restore equilibrium. This is bad news for marine life in shallow waters (read: everything you can see while snorkeling), which is damaged by the imbalance, even if it is temporary.

Essentially, the calcium carbonate in the marine organisms serves as the base in the equilibrium.

So they did not like my calculation. I should've used the Henderson/Hasselbalch equation.. This an equation for calculating pH in environments with high bicarbonate concentrations.

There are just a few tricks we need to know to figure this out. A few facts and a few chemistry definitions.