At first glance, it looks like the climate sensitivity = 1.3ºC. Not so fast, the most important warming from CO2 is due to the first 20pmm (over a third of it). As we add more CO2 the effect tails off to a gentle slope. 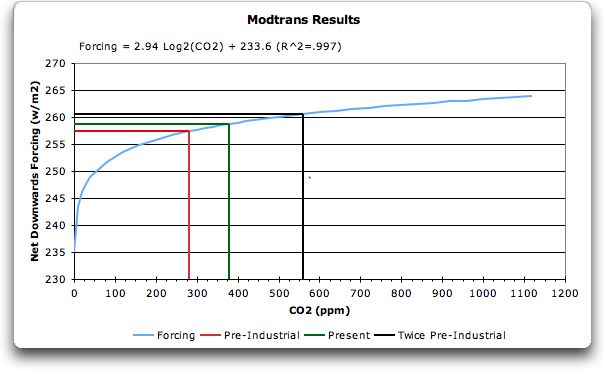 When considering all the GHG effect (water vapour included), at 400 ppm, the effect of more CO2 almost plateaus. 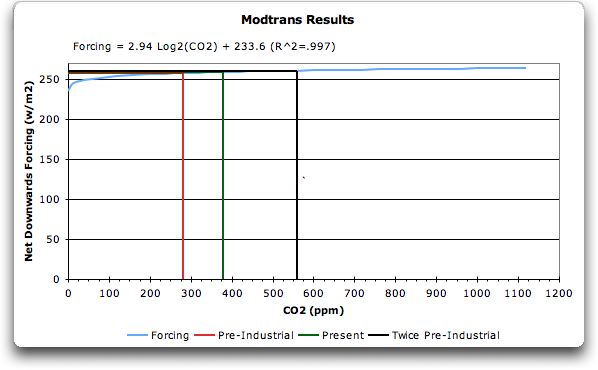 The chart above is a model output, but the CO2 logarithmic effect was first presented by Guy Callendar, an English engineer, in 1938. The Artificial Production of Carbon Dioxide and Its Influence on Temperature, by G. S. Callendar, 1938, Quarterly Journal of the Royal Meteorological Society, Volume 64, Issue 275 [pdf should be available online to download]. Interested parties can make their own charts by following Callendar. Although the IPCC, and apparently, all other climate scientists accept this logarithmic effect, none of them seem to use it to arrive at climate sensitivity. The still end up with big numbers.

I conclude: yes there is a warming effect from CO2 but it is nothing like alarmists say it is. It is a tiny effect. I'm just not convinced by the science any longer.

PS 1: I don't care whether Gary Smith is considered a denier, or whatever, if alarmists can't refute his points, their argument that more CO2 is the central cause of, near catastrophic global warming is irrelevant. What catastrophe?

PS 2: I don't see alarmist climate scientists queuing up to refute the anti-nuclear power claim that nuclear power causes climate change due to the release of krypton-85. I wonder why they're so selective about whom they tar as a denier. It seems their anti-nuclear power friends in the green movement get off scot-free.