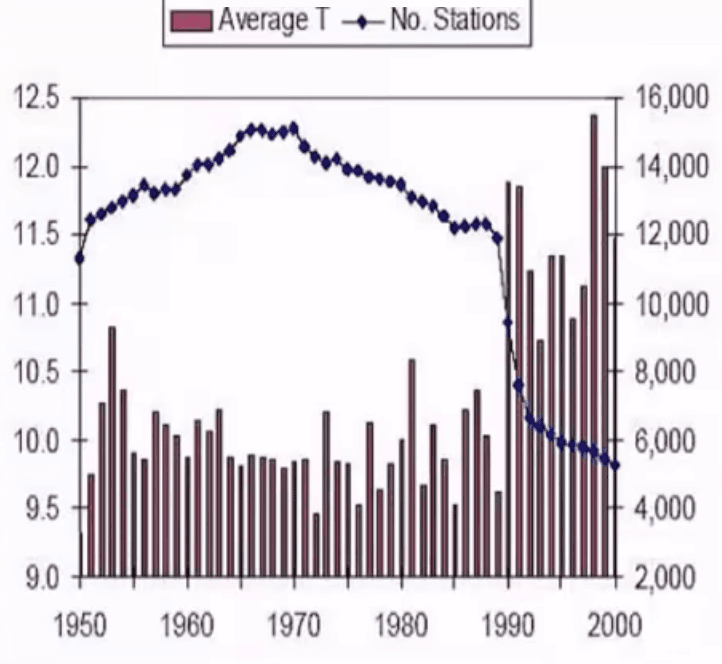 Here we see very rapid [temperature] increase and this of course is said to be caused by human emissions well what really took place is the following: here you see the global average temperature year by year and here's the amount of weather stations recording the temperatures and they slowly went down and then something dramatic happened they fell down very rapidly at the same time the average global temperatures jumped up quite a bit and what happened here? Well the Soviet Union collapsed and not only Soviet Union but more or less all their weather stations in the Arctic. So suddenly there was a heavy imbalance between cold and warm stations making the warm stations dominate and the global average temperature skyrocketed as we see here.

Dr Fred Goldberg
Posted by mark4asp at 06:16 No comments:

Does climate work in an opposite sense to climate models?

CO2 is higher at the Poles than the Equator. When air warms, CO2 goes down and water vapor goes up. The warming effects of CO2 and water vapor do not add; they oppose each other. This is opposite of IPCC claims. It is explained in a recent paper; but is not an empirical claim; nor is the IPCC climate feedback supported by observation!
Posted by mark4asp at 06:45 No comments:

Satellite observations show widespread increasing trends of leaf area index (LAI), known as the Earth greening. However, the biophysical impacts of this greening on land surface temperature (LST) remain unclear. Here, we quantify the biophysical impacts of Earth greening on LST from 2000 to 2014 and disentangle the contributions of different factors using a physically based attribution model.

You probably hear a lot of bad things against Neoliberalism from the woke and left media. It's a general swear word they use when talking about capitalism. A way to dis' capitalism by implying capitalism got worse and turned into something more evil: 'Neoliberalism'.

It is: In fact: what you hear is probably all nonsense. Neoliberalism was specifically, an attempt to make things better by making more human interactions more market like: to apply market principles to otherwise, non-market relationships. For example, Neolibs wanted a market like solution to pollution. They thought they could use the tax system to "make the polluter pay". Using, for example, fines, penalties, to the tax system to act like negative money. In it's essence that's all neoliberalism really is.

What it's not: There are lot's of other iseas associtated with Neoliberalism, supported by the same people who promoted Neoliberalism. Ideas such as free movement of labour and abolishing trade tarriffs. But those other ideas weren't new.

Why Neoliberalism fails? It fails for the same reasons all government interference in the economy fails. Government thinks it knows best. It doesn't. Unfortunately Big Gov does not care. Because everyone in Big Gov is using Neo-lib policies, they are all, neolibs. Even the woke and left critics of neoliberalism are neo-libs. Despite it's failures, Neoliberalism remains without real critics because governments never abolish useless regulations.

We'll probably need to, at least, triple electricity supply in the end to move to 'zero carbon'. Double to move vehicles to electricity. Tripling it will also do away with gas boilers. We can't get to zero carbon. There are no plans for zero carbon ocean: frieght, air traffic, nor heavy industry. Just road traffic and domestic heating.

Assuming higher electric car efficiency, we need to add about 333/15 TWh per year in electricty generation until we've doubled it after about 15 years. About 22 TWh/year. But we're also banning domestic gas boilers! So make that about 13% more electricy per year (about 44 TWh) for 15 years. This is 5GWe of dispatchable plant per year. Nuclear plants take about 6 years from 1st concrete to finish and another year of testing before they are connected to the grid. At least 7 years. I see no plans to build NPPs from 2023. We begin phasing out the existing nuclear fleet in 2022. It should all be decommissioned by 2030.

If we build more wind turbines we need to build natural gas plants to supply dispatchable electricity in a wind lull.

Reblog: Judith Curry science review.. I commented out a lot of these because when they're of no interest, have been said before, especially when they're not hard science. After skipping through the open access, I'll get to the pay-wall papers one by one - even if they don't interest me - because they interest Judith Curry - who is an influential person.

My intention is to copy the links worth reading, so I can comment on them. I'll look at the open access papers first.

A few things that caught my eye these past 10 (!) weeks

About science and scientists

Review: Rex Fleming: Rise and Fall of the CO2 theory of Climate Change

Dr Rex Fleming, an ex- Climate modeller (now retired), with qualifications in physics and maths, renounces IPCC and establishment to look at what really causes climate change. He says that climate models fail and

"CO2 does not contribute any net heating to the atmosphere column - though both CO2 and H2O contribute to the thermal blanket at the earth's surface.

His motive: Fleming breaks ranks with the climate establishment on humanitarian grounds because of the deliberate attempt to obstruct fossil fuel use. Many regions in Africa have grossly inefficient energy systems or no energy systems. Leaving: inadequate clean water and food, landscape denuded of trees, women forced to cook with dried animal dung.

Far from global warming being a worry - the opposite - a return to cold conditions of the Little Ice Age is a huge concern.

IPCC climate change: IPCC / establishment definition of climate change is wrong. IPCC definite climate change as a change in earth's surface temperature over a 30-year period; with humans overwhelming the cause. Let's call the IPCC version of climate change: anthropogenic global warming, AGW - as there's no scope there for humans to cool the climate. In fact: recent research shows that more CO2 in the atmosphere promotes plant growth and more vegetation does, indeed, cool the climate! by about ⅓C in vegetated areas. In addition the 30 year period over which climate is decided has always been wrong because there are clear ocean cycles lasting longer than 30 years! (65 to 70 years!) - such as the AMO 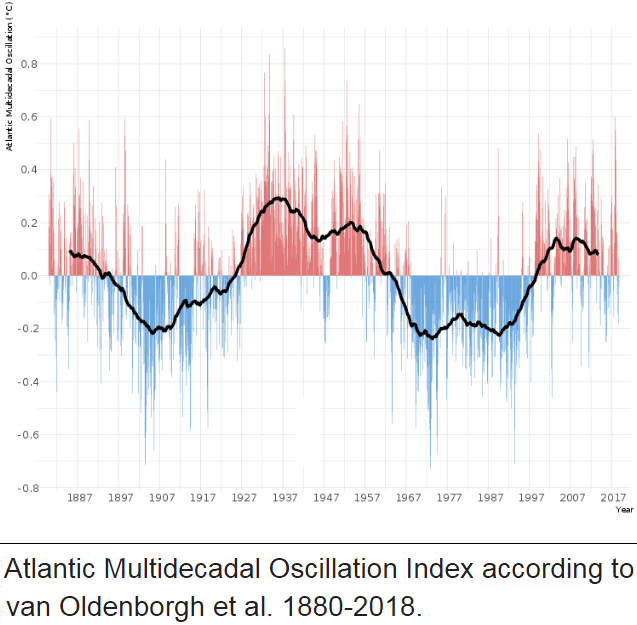 They have ulterior political motives to promote renewables and abolish fossil fuel use.

IPCC tactics are to scare the public over extreme weather - supposedly caused by people: Hurricanes, bush fires, heat waves are all blamed on humanity. They acieve their objectives by replacing the temperature record with anomalies and adjusting to make the anomalies look big. Justifying 90% AGW with bad models. Mass media is ruthless controlled to censor reason and dissenting views.

The global temperature anomally relates to nothing but itself.

Oceans and atmosphere are turbulent, interacting, fluids. Atmospheric winds drive ocean currents and oceans exchange heat and chemicals with the atmosphere. The atmosphere is chaotic and oceans have chaotic elements too.

There are 3 dynamic atmospheric processes transferring heat from earth's surface:

Radiation also works to transfer heat to space. But due to changing amounts of water vapour with altitude it works differently according to altitude. The relative role of radiation has been bother exaggerated and misrepresented. The effect of the sun on climate is much greater than media and establishment say; amounting to fraudulent misrepresentation.

Temperature adjustments IPCC measure temperature changes since 1880; claiming human fossil fuel use increased climate warming by 1C. Their trick is to manipulate temperature records and always talk in terms of temperature anomalies (never actual terran surface averages). This enables them to set the starting position of global temperature (in 1880) at anything they want. In practice: they set it at about 14C, or less. In fact a book written in 1889 stated the average global surface temperature was 14.6C. Many metrological institutes today still measure the global surface temperature at below 15C - indicating a real rise of only about 0.4C over 110 years; when they claim temperature rises of at least 1C due to man-made changes over the last century! PS: Fleming does not state this]

This is a valuable book on technical aspects of climate change. It's a must read. I also recommend Don Easterbrook's new book to complement it.