We prove that the GCM-models used in IPCC report AR5 cannot correctly compute the natural component included in the observed global temperature. The reason is that the models fail to derive the influences of low cloud cover fraction on the global temperature. A too small natural component results in a too large portion for the contribution of the greenhouse gases like carbon dioxide. That is why IPCC represents the climate sensitivity more than one order of magnitude larger than our sensitivity 0.24°C. Because the anthropogenic portion in the increased CO2 is less than 10%, we have practically no anthropogenic climate change. Low clouds mainly control the global temperature.

... The time interval (1983-2008) in Fig 2 is limited to 25 years because of the lack of the low cloud cover data. During this time period the CO2 concentration increased from 343 ppm to 386 ppm and both Figures 1 (IPCC) and 2 show the observed temperature increase of about 0.4°C. The actual global temperature change, when the concentration of CO2 raises from C0 to C, is

where ΔT2 CO2 is the global temperature change, when the CO2 concentration is doubled and Δc is the change of the low cloud cover fraction. The first and second term are the contributions of CO2 [5] and the low clouds, respectively. Using the sensitivity ΔT2 CO2 = 0.24°C derived in the papers [3,2,4] the contribution of greenhouse gases to the temperature is only about 0.04°C according to the first term in the above equation. 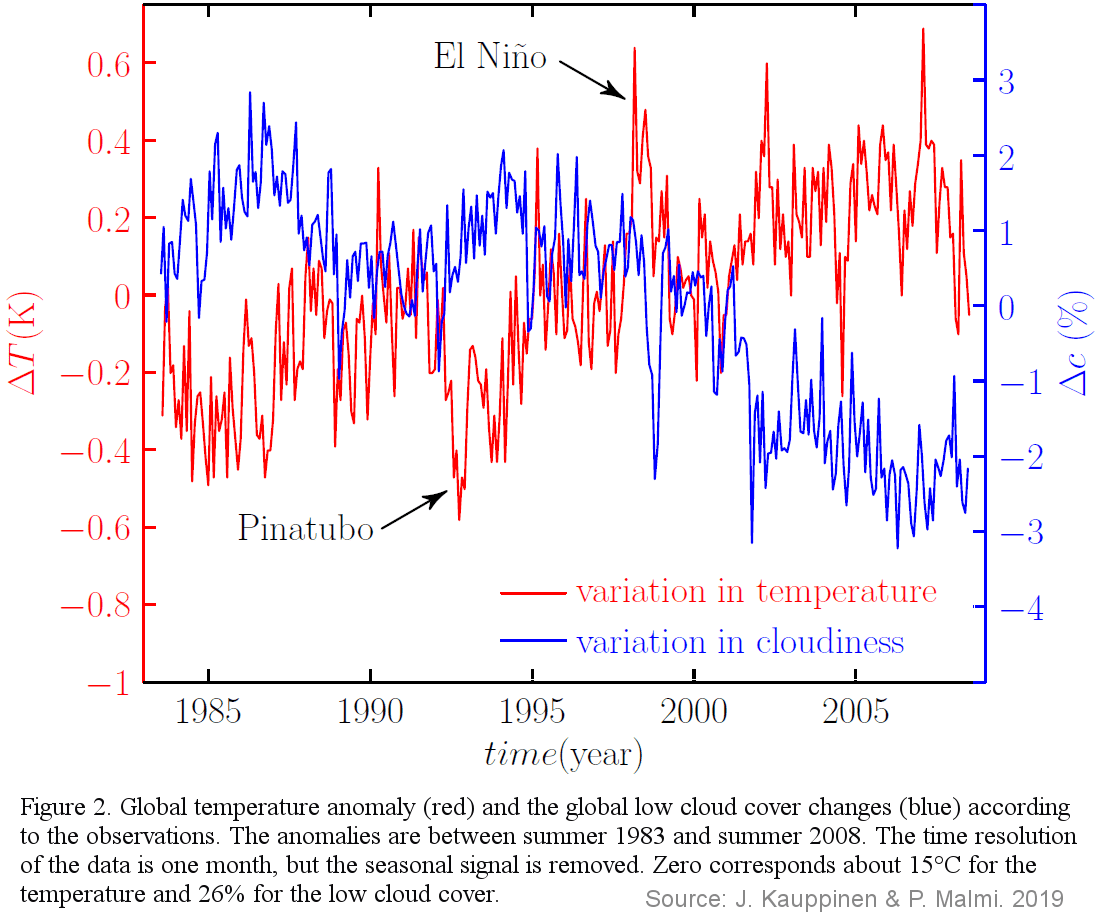 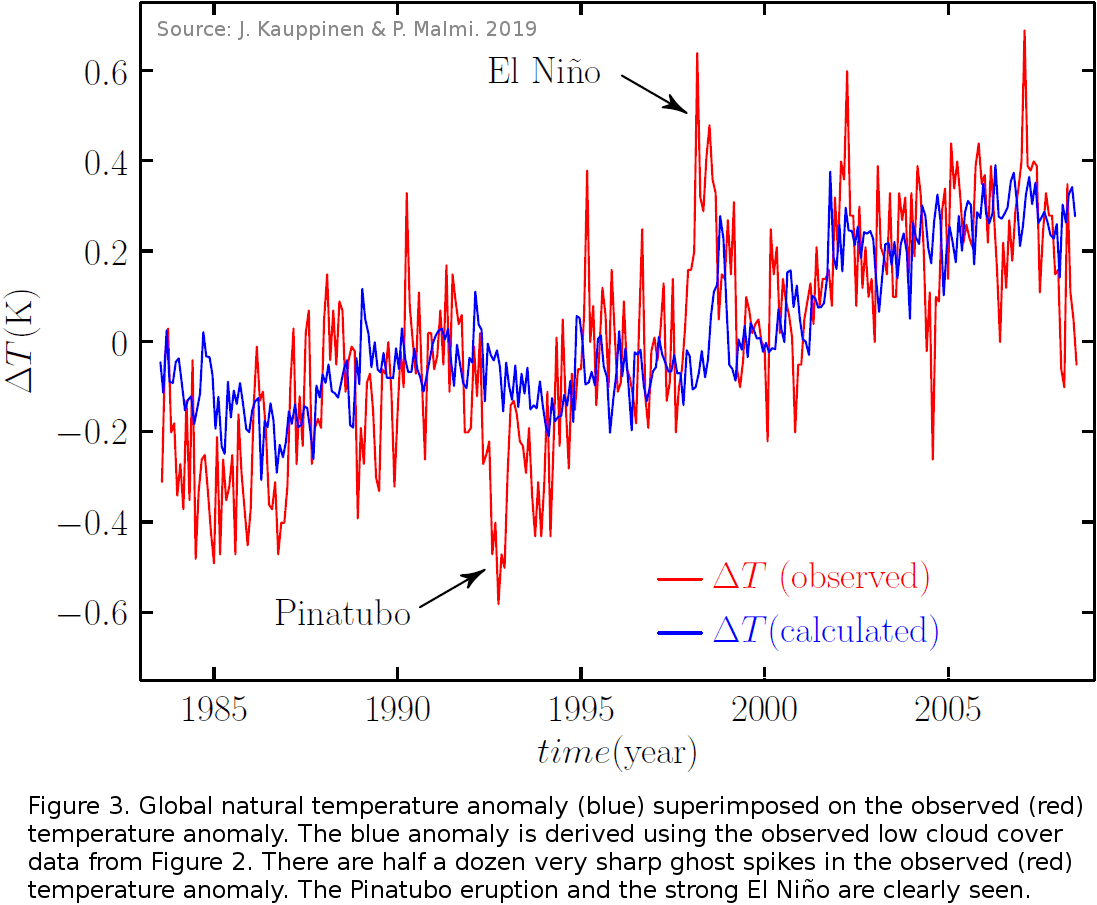 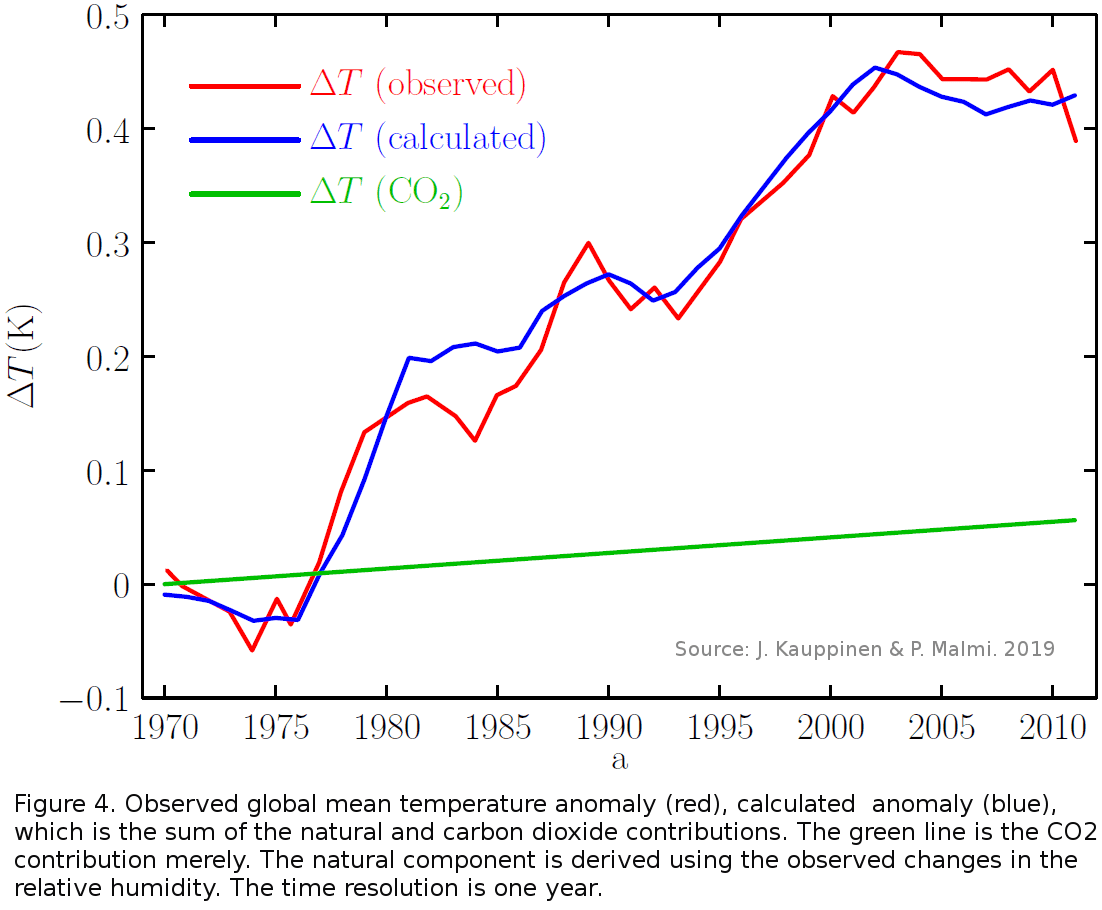 The IPCC climate sensitivity is about one order of magnitude too high, because a strong negative feedback of the clouds is missing in climate models. If we pay attention to the fact that only a small part of the increased CO2 concentration is anthropogenic, we have to recognize that the anthropogenic climate change does not exist in practice. The major part of the extra CO2 is emitted from oceans [6], according to Henry`s law. The low clouds practically control the global average temperature. During the last hundred years the temperature is increased about 0.1°C because of CO2. The human contribution was about 0.01°C